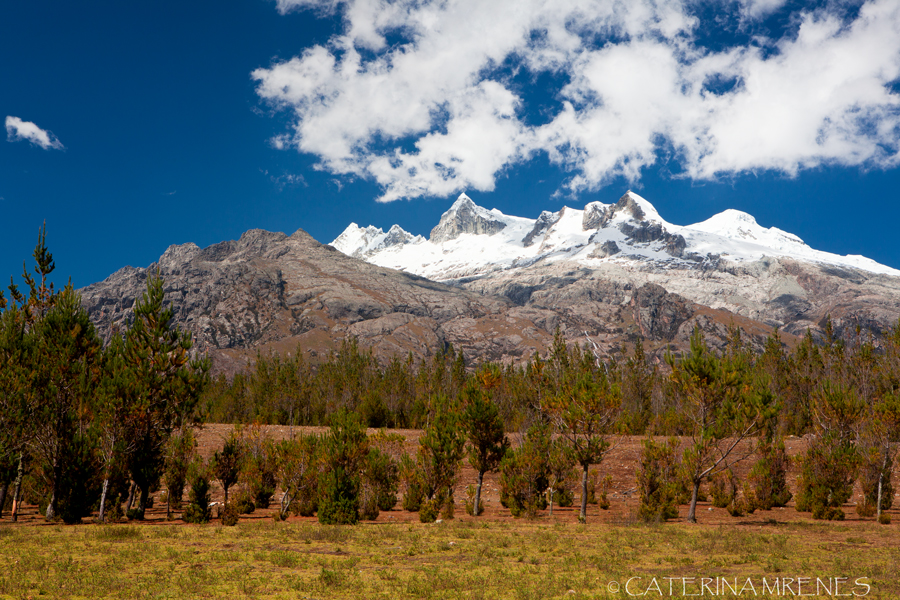 My fascination with the Andes goes back to the time I was a kid, reading Jules Verne’s novel “ The Children of Captain Grand“.  Accordingly, I should have gone to Patagonia, because this is where Lord Glenervan and his companions experienced their first adventures. However as time went by Matthias and I couldn’t decide what we wanted to see in Patagonia. One day, while surfing in the Internet, I came acrros the website of a professional photographer showing beautiful pictures of Cordillera Huayhuash in Peru. We were both so fascinated by the landscape that we dropped right away the plans to visit Patagonia and focused instead on Peru. As it happens, while searching for further information about Cordillera Huayhuash we came across Christian Alvarado and his small agency, Go2Andes. In order to have a comparison we contacted in the beginning two more operators, but very soon decided to stay with Christian not only because he answered our questions with reassuring German precision but also because he never tried to convince us to buy more services than we seemed to need. Since we wanted to have a bit of flexibility, we didn’t buy a „full-options“ package from Christian and rather made with him only the arrangements for the Classic Huayhuash Trek and two climbing tours in Cordillera Blanca. For the accommodation we chose Guesthouse Morales, without knowing at the time we booked the room, that the owner, Hisao Morales, was also the owner of one of the oldest and most famous tour operators in Huaraz, Peruvian Andes Adventures. With Hisao’s agency we did  also the first two acclimatisation hikes and the hike to Laguna 69. In his guesthouse we felt almost like home.

Maybe I should spend first some words on the backpacking gear we used for Huayhuash: I get easily cold so I opted for a very warm sleeping bag: Mountain Equipment Glacier 1250, with a comfort temperature of -12° C. For Matthias the Glacier 1000 was sufficient. Our tent is the very robust, four seasons model Venus Exped Extreme II which we actually intended to use in Patagonia, famous for its powerful winds and down pouring rain. Altogether we had with us the complete winter gear with base layers (all from the unbeatable Icebreaker), polartec fleece, wind cheater, down jacket and of course the irreplaceable GORE-TEX hardshell. Of course I used every so often all the layers, Matthias used sometimes several layers… In the Cordillera Huayhuash, during the day the sun can be very hot but the temperature drops down considerably the moment the wind blows or the sun hides behind the clouds. After sunset the temperature drops below 0 within an hour and each night ice formed on our tent. However, less than -5° C in the night are not to be expected at this time of the year (Mid May to Mid June).

We did take a water filter with us (Katadyn Vario Filter) but used it only once, at the third camp of the Huayhuash trek (Laguna Carhuacocha). The only water source there was the lake itself  and there were a lot of dogs roaming around. Otherwise we trusted our cook, Pablo, to boil the water long enough, which is very important because in this height the water boils before it reaches 100°.

Since we had donkeys with us, I had the unique occasion to take with me the whole camera gear I own: EOS 5D Mark II, three lenses (16-35mm, 24-70mm, 70-200mm), polarising screens,  an array of neutral density filters from LEE, a tripod (Manfroto), and seven batteries (!). It proved in the end that seven was too much, I used during the whole Huayhuash Trek only four. However, the Canon original batteries proved to last considerably longer than the no name „Premium Pro“ I bought before we left. Once again I’ve learned, that buying cheap (and they were not that cheap actually!) means buying twice.  Anyway, doesn’t matter if Canon or Premium Pro, each night I took the battery out of the camera and put it in the pocket of my fleece jacket, while the extra batteries were packed carefully in the sleeping bag. It is not good to leave the batteries outside the tent in those temperatures, since they will lose energy much faster.

By the way: despite some IATA- regulations I have read before leaving concerning hand luggage and according to which you are allowed to take maximum two extra batteries as cabin luggage, no security check, neither in Amsterdam nor in Lima, neither on the way there nor on the way back, had something to object to the considerable amount of mAh I had with me (I carried with me also extra batteries for the headlamp).

For a better acclimatization and because I am obsesed by the possibility that the luggage arrives one day later, we chose to sleep in Lima one night and start to Huaraz only the next day with a bus from Moviltours. Though their website is only in Spanish, we managed to buy the tickets without asking Christian for further help. The travel to Huaraz takes 8 hours for aprox. 400km and starts gaining height only after some four hours of driving along the coast of the Pacific. The service is indeed very comfortable (and the meal served better than that of the airlines), but beware of the movies playing on the TV! To be honest, I have never thought that such abysmal level of idiocy can (and does) exist in the (American) cinematography.

During our stay in Peru we did five day hikes – four acclimatisation hikes before the Huayhuash trek and one at the end of the holyday, before we went back to Lima. Originally only two were planned, but after the first hike the height affected me really badly, so we decided to shorten the trek with two days (and thus renounce the day off and the visit to the base camp of Siula Grande) in order to acclimatise better. 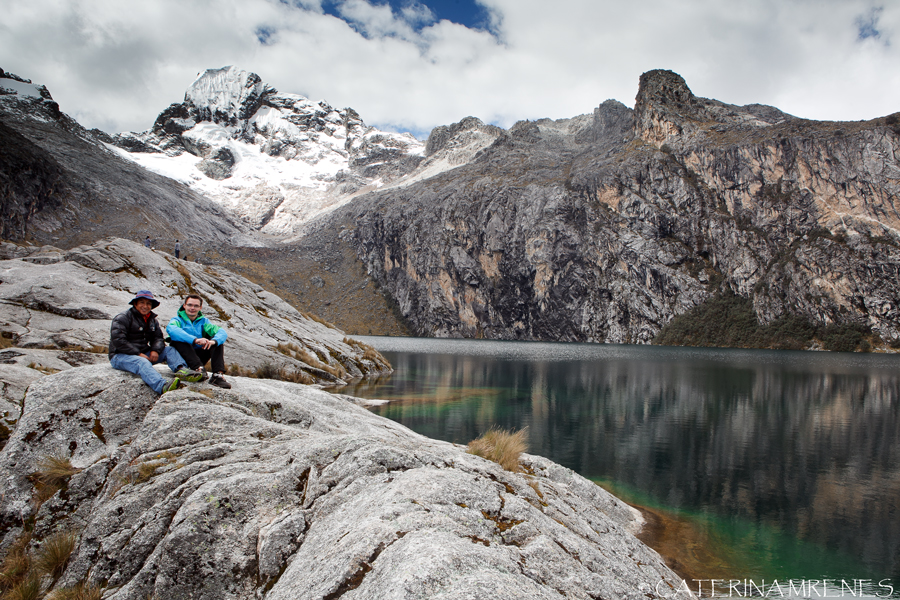 Matthias and Walter at Laguna Churup (4.450m) in Cordillera Blanca

On our first hike we went to Laguna Churup (4.450m) in Cordillera Blanca. Together with Laguna 69 it belongs to the standard hikes offered by most agencies. However it is not a good choice for the first day if  you left Lima (35 m.a.s.l) only 24h ago. Matthias didn’t feel the slightest inconvenience, but by the time I made this picture I had such a strong headache, I could barely speak. And it didn’t get better after we starting to descend, on the contrary I have experienced a horrible cardiac dysrhythmia. For this reason we decided in the evening to make two more acclimatisation tours before starting our Huayhuash trek and we really appreciated the flexibility with which Christian changed the plan accordingly.

The next day we went to Laguna Urus (4.400m). If being alone is what you seek, then this is the hike for you! Over a relatively small surface the landscape is extremely varied, changing from the pastoral scenery of the village Pashpa, where women wear colourful traditional clothing…. 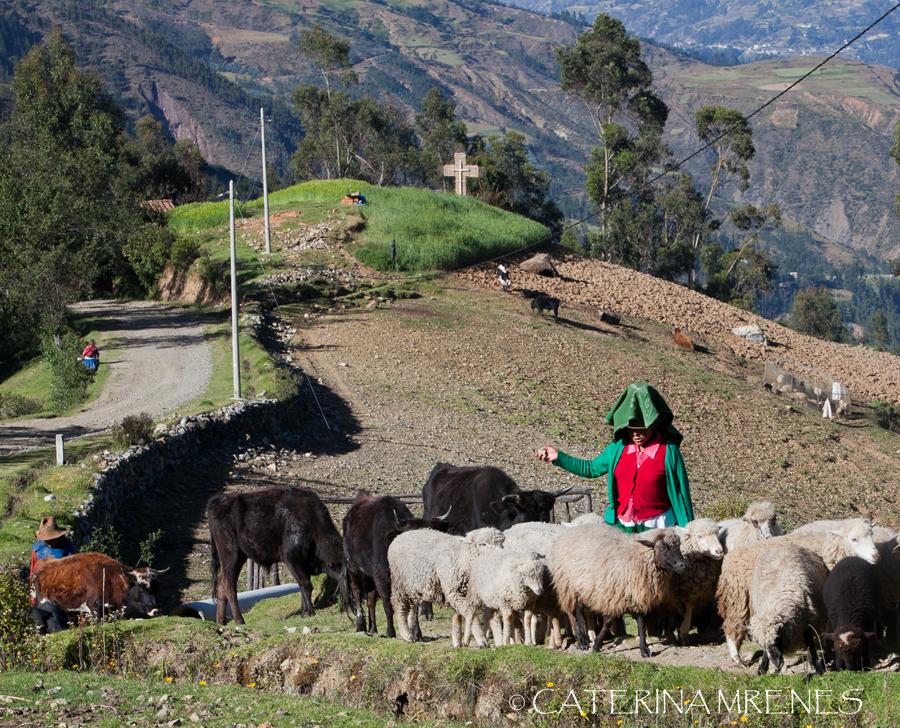 … and peasants work the land with antique utensils… 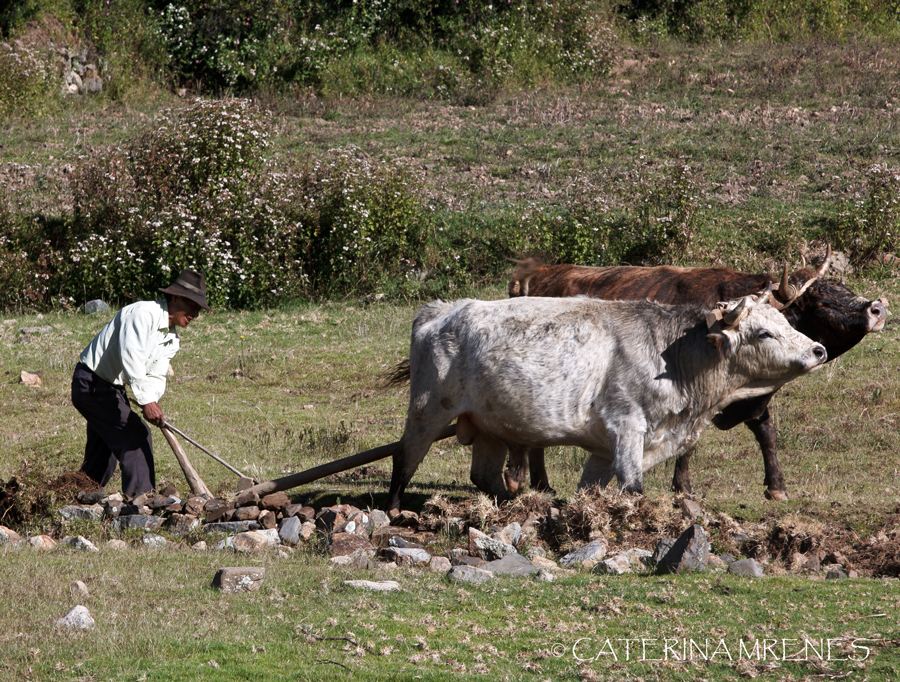 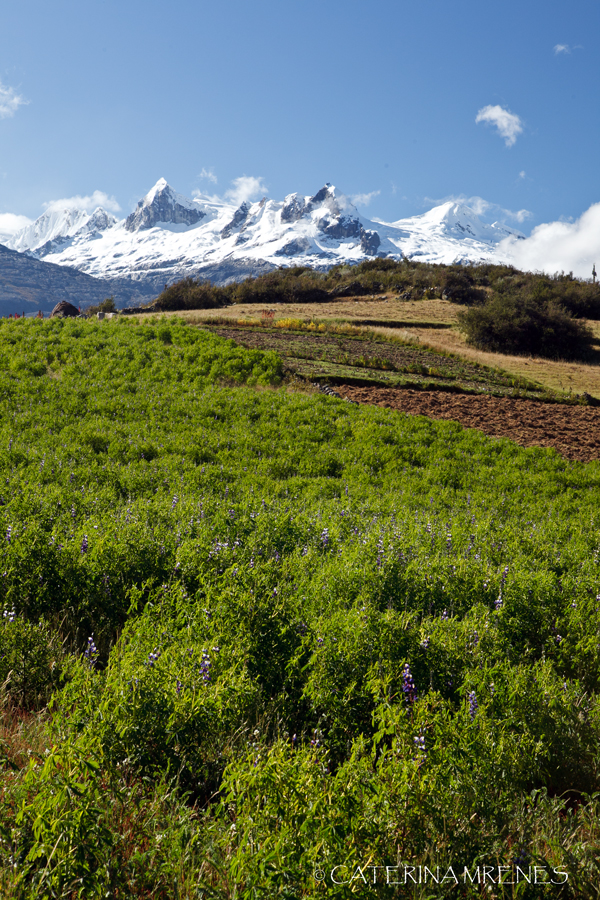 On the way to Laguna Urus

…to green mountain meadows which last only for a few weeks after the rain season. It is an established etiquette, that if you want to make close-ups of people you have to ask for permission. Be prepared also to pay something, the price varies from 2 to 5 soles ( 1 EUR=4 Soles). Mostly they will say yes, smile friendly to you, even try to chat with you  (even if you don’t understand) or with your guide.

With growing height we reached later this exotic looking forest (even more beautiful is the forest on the way to the Ishinca Valley where the base camp for Ishinca, Urus, Tocclaraju and Ranrapalca is. Laguna Urus and Ishinca Valley are both located in the same area and have Pashpa as starting point for both but while everybody knows about the latter, only few go the former). 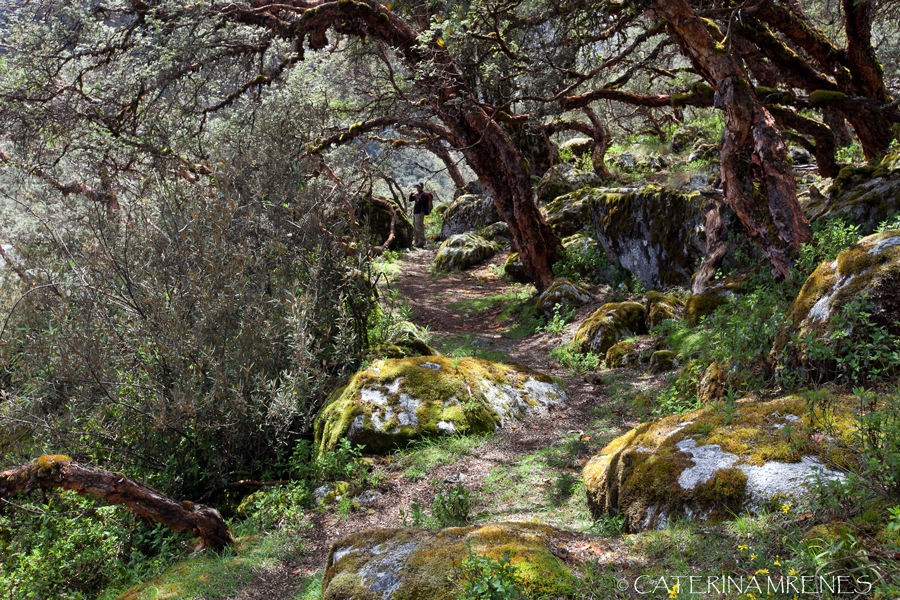 On the way to Laguna Urus

For a good part of the way we were accompanied by the majestic Huascaran, with ist 6.768m Peru’s highest mountain and as it seems, more dangerous for the people living in the valley than for the alpinists trying to reach its peak. Two times, in 1962 and in 1970 (when a tremendous earthquake occured), big chunks of ice and rock broke off, rolled down the valley and killed first time aprox. 4.000 people and second time 20.000. The City of Yungay was in 1970 practically totally destroyed. 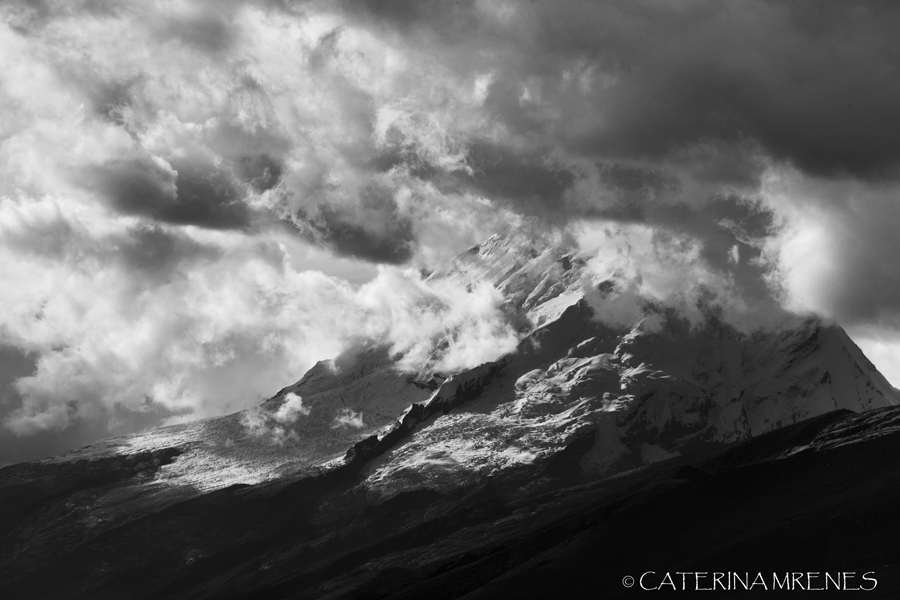 After 3-4h we reached Laguna Urus, which is rarely visited. Here you can thus enjoy peace and quietness (if it’s not windy). 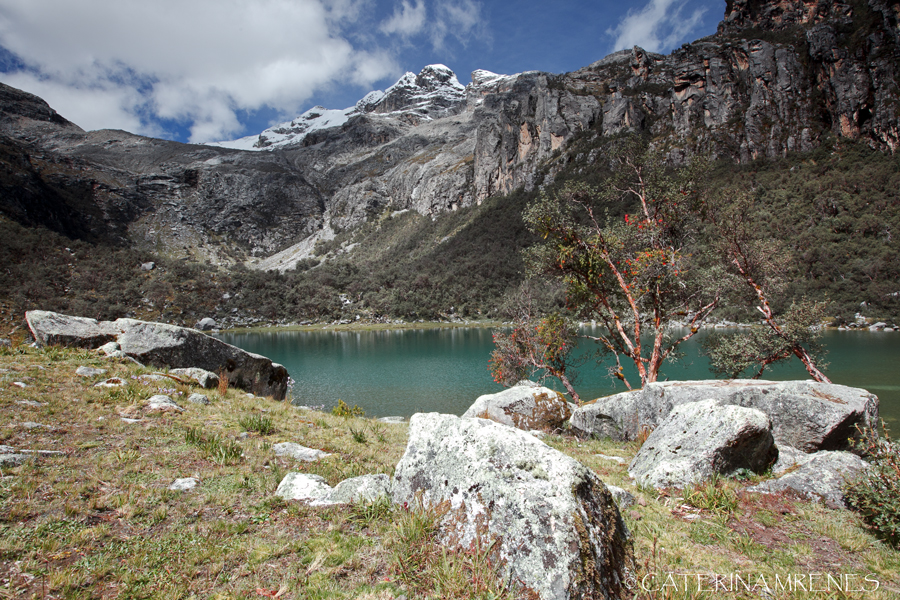 On the way back we stopped again in Pashpa to admire its unique garden flowers. Flowers are at this time of the year so abundant that they colour whole hillsides of the mountains and people adorn the most unusual places with them (like for instance the toilet from Cafe Andino or the meat stand in the market of Huaraz). 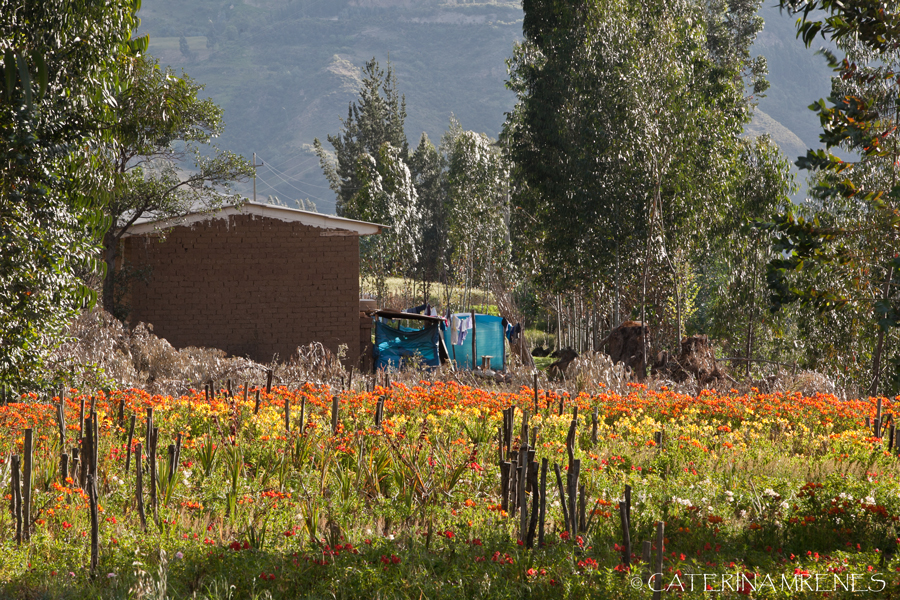 I don’t have much to say about the third hike to Laguna Ahuac (4.560m). It is little known and the way there is long and not particularly interesting, at least not compared to Laguna Urus, Churup or 69. The lake itself is surrounded by mountains but by the moment we reached it, a heavy lasting ice rain had just started, so we actually couldn’t see much.

Our fourth and last hike before starting the Huayhuash-Circuit was to Laguna Wilcacocha (3.725m) in Cordillera Negra. That was a lovely very easy walk through the country side, not spectacular like the other three, but nevertheless enjoyable. However due also to the haze on that day, the only motive that cought my eye on this last hike was this door: 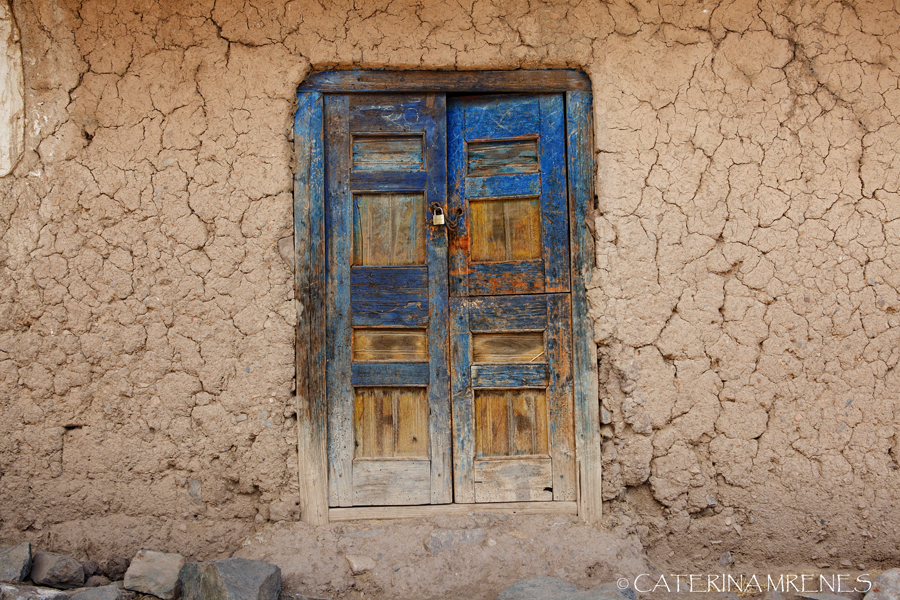 To Laguna 69 we went on our last day in Huaraz, before going back to Lima. With its fantastic blue colour, Laguna 69 is a photo model in itself. The way to this place is also very beautiful. Accordingly, expect to meet a lot of people. You must be a very sociable person to still enjoy the lake under these circumstances, or you must camp there over the night in order to have the lake for yourself. 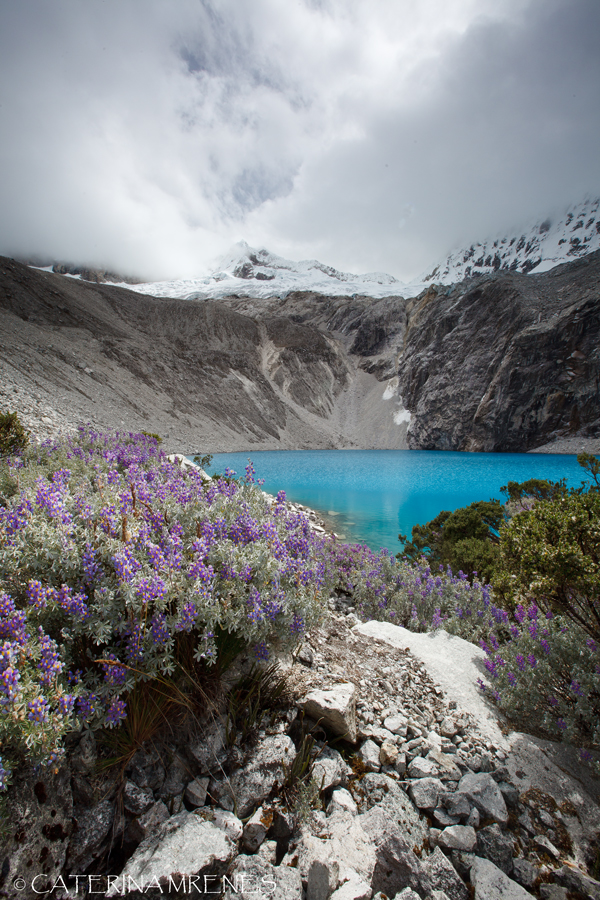 The name is, well, a bit strange, one cannot restrain from making certain associations, so I asked what was the explanation. But the answer is simple and devoid of further meanings: the cartographer couldn’t find out what was the local name of the lake so baptised it with the current number. 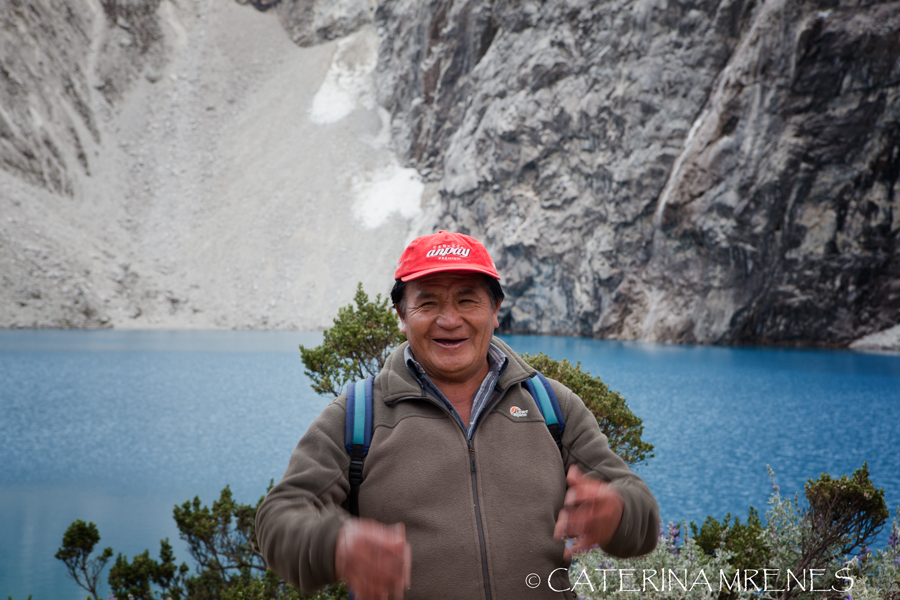 With Nestor Morales at Laguna 69 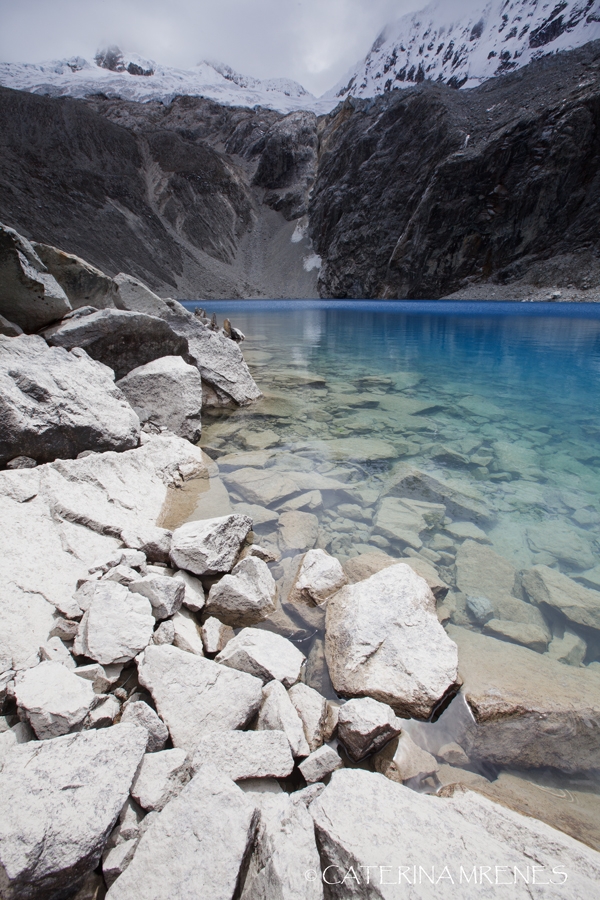 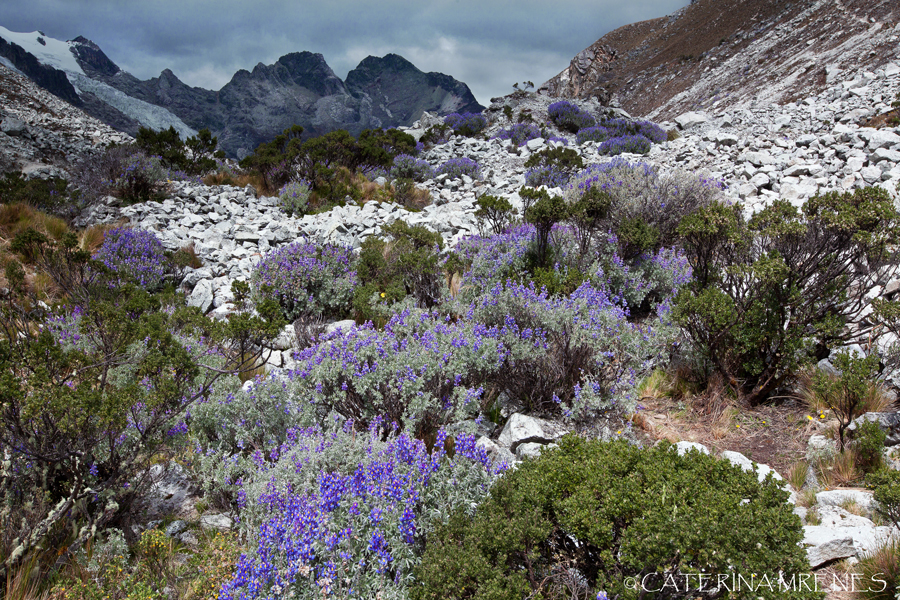 On the shore of Laguna 69 looking in the other direction

At this time of the year – and this was one of the reasons we wanted to visit the Andes already in May – lupins bloom and turn whole mountain hillsides blue.

On the way back we were a bit in a hurry because it looked like it was soon going to rain. 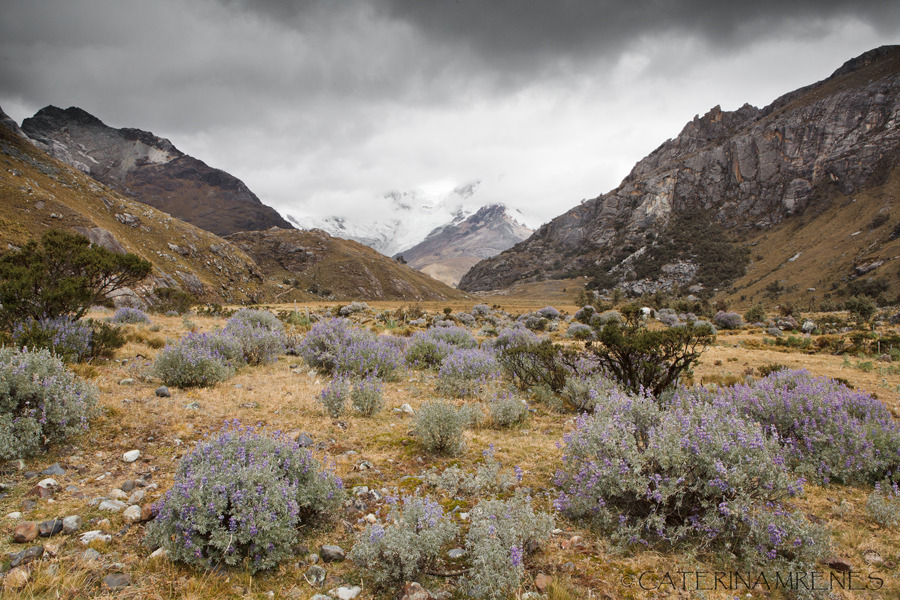 Descent from Laguna 69 with Huascaran hidden in the clouds

The next day was our last day in Huaraz. After four fantastic weeks in the peruvian Andes, during which we have seen splendid landscapes and met wonderful People, we have had our last breakfast on the terrace of Guesthouse Morales, before taking the bus to Lima. Hisao is looking very cheerful – maybe because he was at last getting rid of us. 🙂 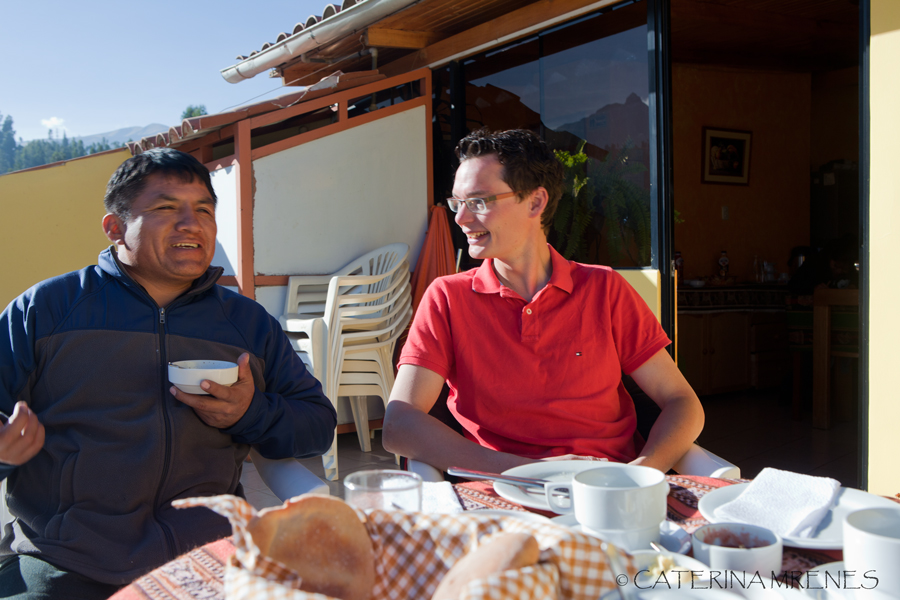 Matthias and Hisao Morales on the terrace of Guesthouse Morales

This entry was posted in Peru, Tourenberichte and tagged Cordillera Huayhuash, Peruvian Andes.